I want to dedicate this entry to Snowy.Snowy along with her 3 gal pals arrived in Hong Kong on a cold winter morning in January, 2010. They just got wheeled off a flight from Alberta, Canada. The 4 girls were in a large dog carrier, and when I first saw them I remember how big they all were! (Mostly because I'm so accustomed to little men like Puffy) This was the first day on my bed, 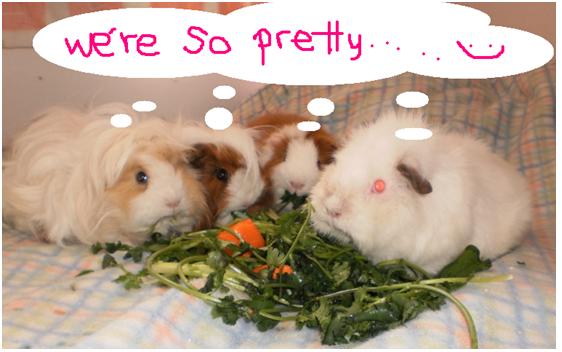 At the time, I have to say my favourite was Shylie. She was so big and magnificent, with hair like a queen. I didn't even notice how rotund and chubby Snoopy was, and Snoopy is a fave now :) I also distinctly remember not getting used to Snowy's red eyes, it made her look evil. Thinking back now, what an outrageous and unfair label. This isn't meant to be a memorial post, because Snowy is alive and well right now. But that's exactly why I want to write this....sometimes when the beautiful things are around I don't cherish them enough, then when they're gone I write an elaborate post. I don't think that's right, I want to explain right now why she's so special to me. When she was in Canada, her owner then had her for over 2 years already, and when he first got her she was already a full grown female. That means prior to coming here, she's already 3+ years and if you do the maths, that puts her at nearly 8 years old now. That's a grand age to be. Over the years, she's had two pregnancies, in Canada: 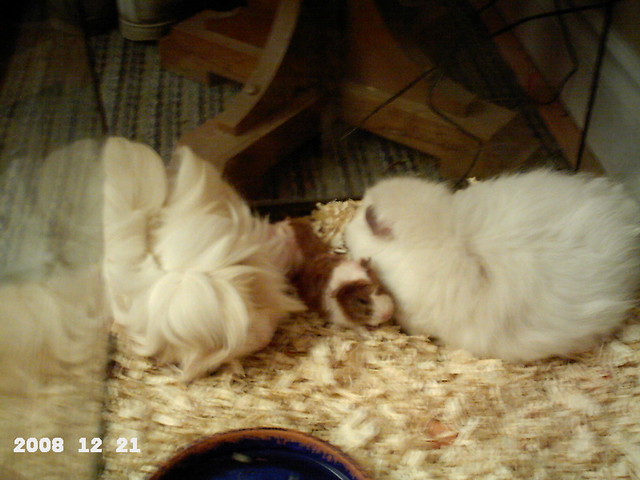 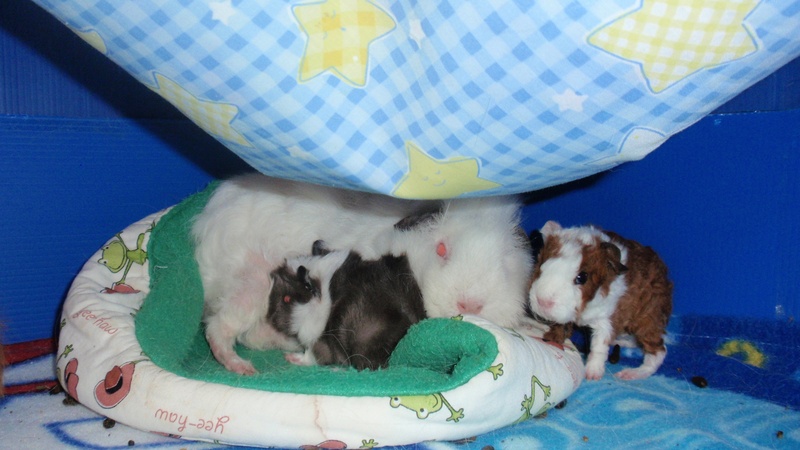 Then she fought an ovarian cyst, where she lost so much hair and the poor girl was restless all day with the hormones...I had to isolate her. She was miserable and didn't even know why

This is one of my most pitiful photos of her, 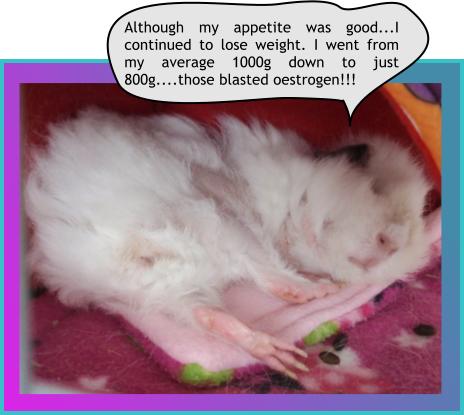 Dr. Gerry spayed her, and she made a full recovery 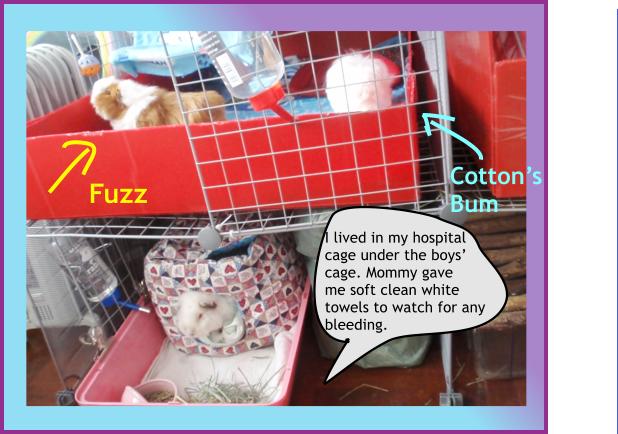 That was about the time Fuzz was adopted away by my friend Winnie, and Cotton became a lone pig. So Snowy being the only spayed girl became Cotton's girlfriend. She was not impressed because that was her son. This arrangement was temporary, of course. 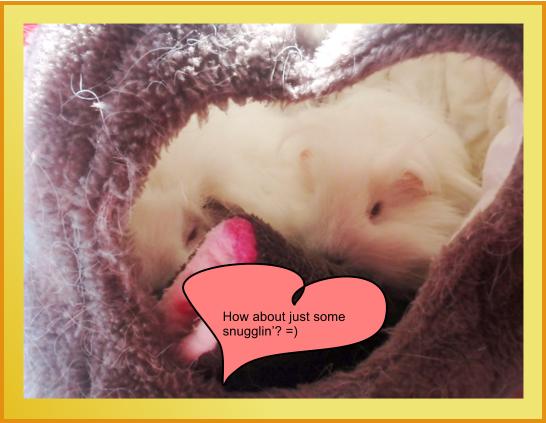 Now she's settled down into the herd of 8 in the big cage for years, and I've gotten so accustomed to see her among the crowd, sometimes I forget that she's a very precious senior pig. I swear, she's the young at heart. Just 2 weeks ago, she still stands for veggies, roots through the hay bag on 2 feet 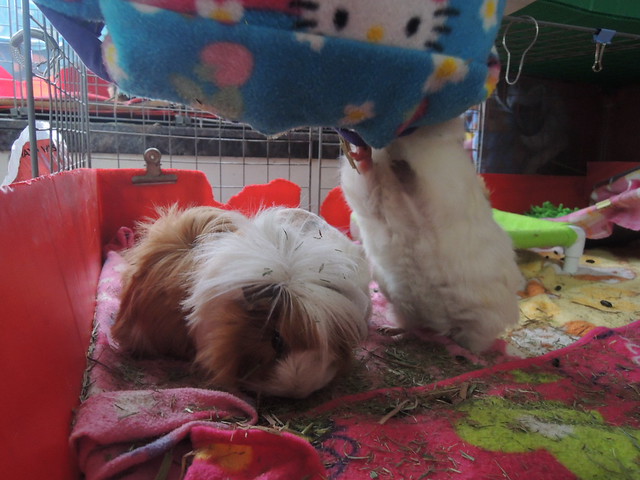 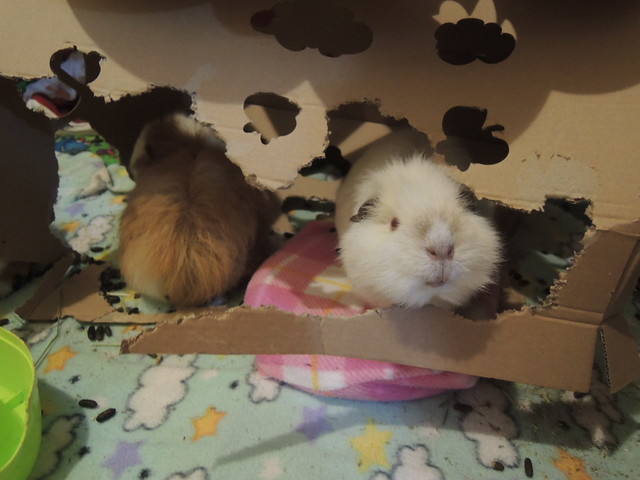 protested hard about being blow dried upside down... 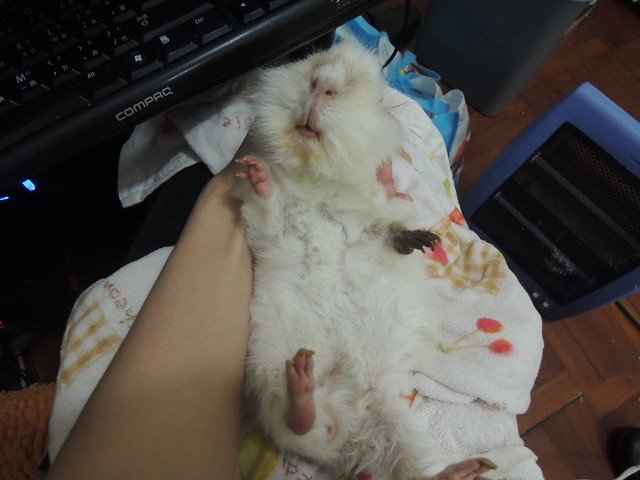 "Okay! Come and find me now! Anyone?" 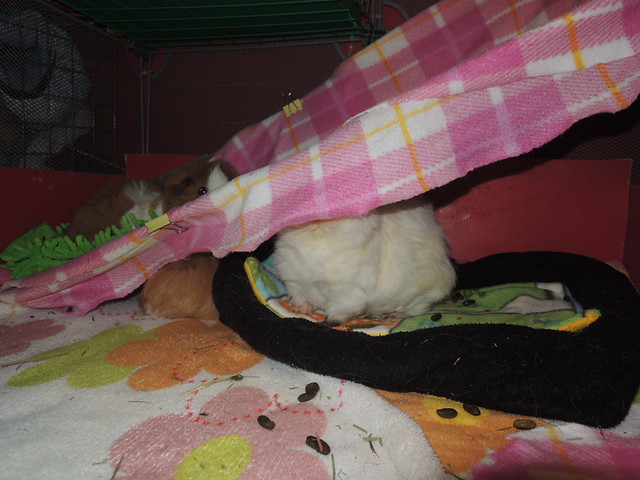 and just generally doing what she does best: being an everlasting presence in the cage, and in my life. 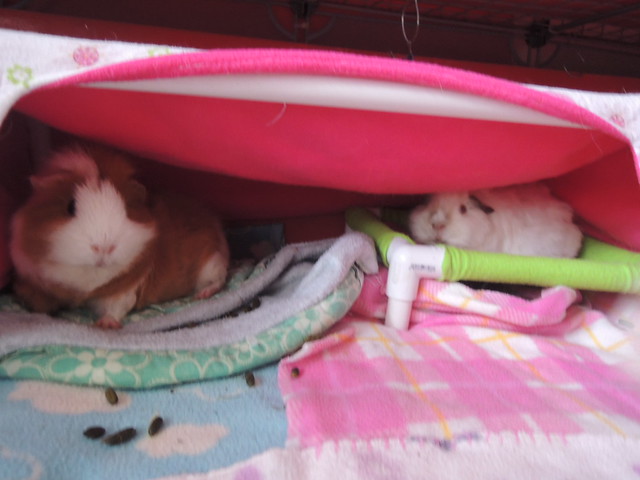 Oh, I should add, she always greets me with a smile 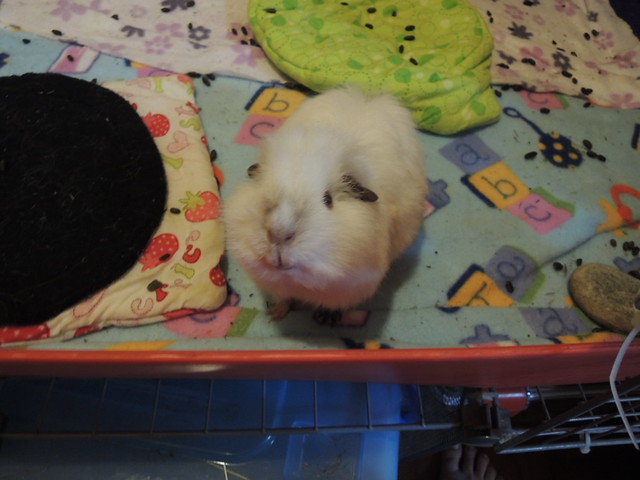 About 2 months ago she had an onset of ringworm on her bum. It was a circular bald patch I noticed when I returned from Beijing. She was on a 1 month course of Sporanox and is completely fine now. The hair is growing out nicely on her behind. But it was also a sign of her immune system being down, because none of the other girls got it. But the past weekend, arthritis took a cruel hit and she couldn't move her front foot. I noticed her in the morning walking very jerkily and making distinct, whimpery sounds. Her appetite was good the whole time. I took her to the vet the next day, and it is her left wrist that's swelled up. The doc is taking a gentle approach with a pig her age and didn't want to do any blood tests, xrays....although he says there are no broken bones for sure. So now she's on metacam and critical care, I also went to a local store yesterday who sold Oxbow's Joint Support and Senior Support. Time to spoil...! 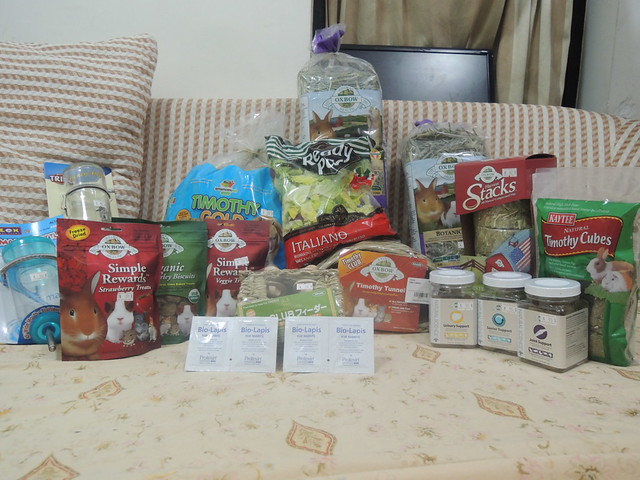 This is her look when she ate her Joint Support tablet. It's like she's chewing and making sure no one grabs it. We have some very selfish cage mates... 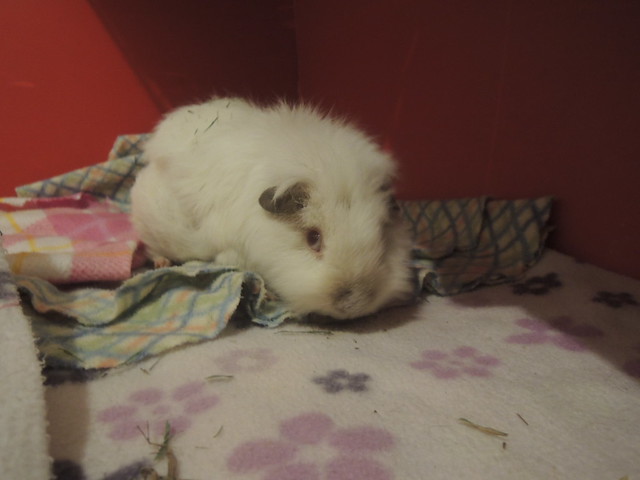 This was her on Monday, at her worst. She's in the hospital cage and I put her near water and hay because she doesn't want to move at all. It was heartbreaking watching her adjust and readjust her weight gingerly, and she mostly lies curled to put her weight on one side only. 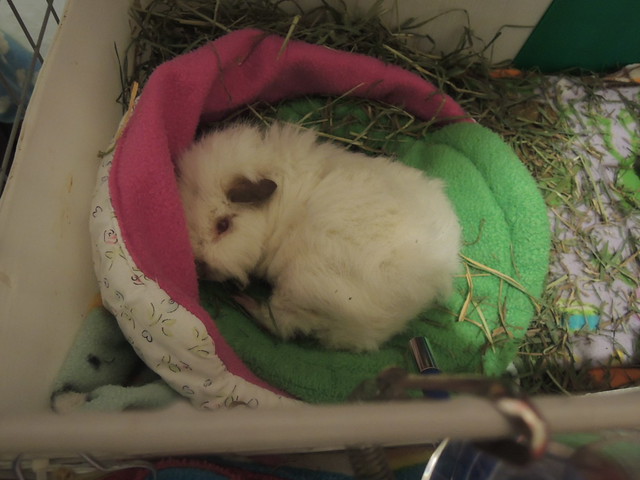 Sometimes I wonder if I should put her in the hospital cage for longer, to avoid the rough and tumble of herd life. But I think one of the factors that contributed to her longevity is being in a stimulating environment, with so many of her kind. So I maintain that she should always remain in the big cage. But we keep an extra eye out for her. This is a shot from yesterday. She is my strength

"look at meee! back on all fours!" 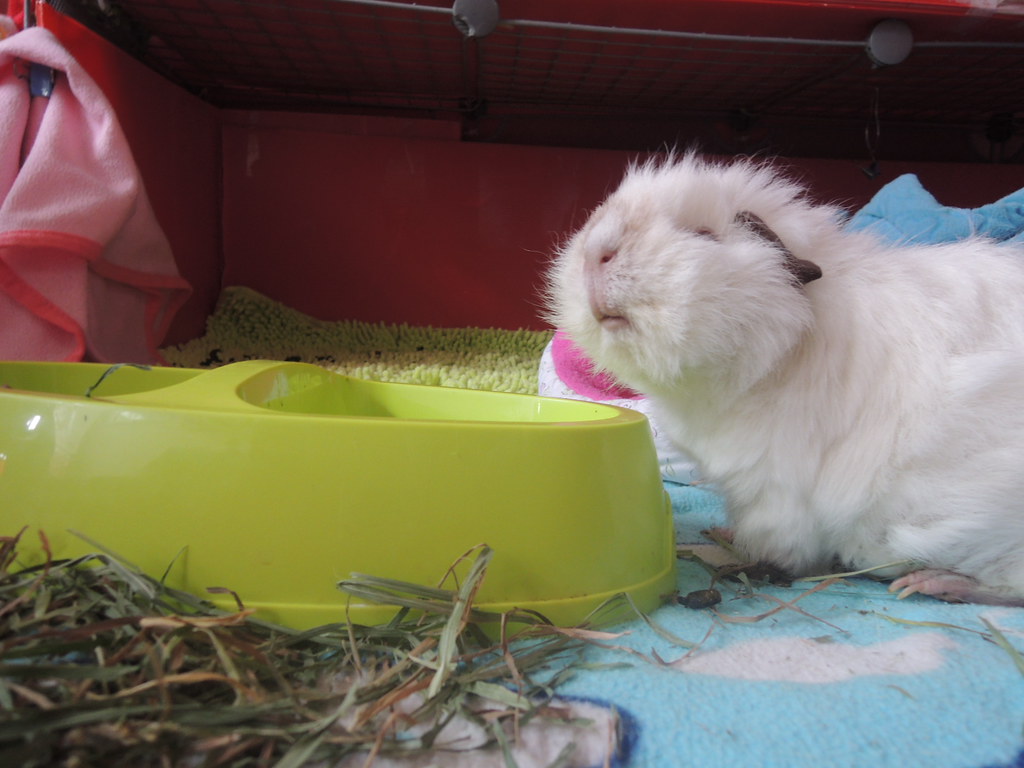 In June last year she had diarrhea and was weak on her legs, I took her for subcut fluids every day for a week to keep her hydrated. I remember feeling so good inside, no matter how far the vet office was (other side of Hong Kong from home), it was just the greatest feeling, knowing she's getting something to make her better. Those days she was so weak she couldn't walk properly, and I thought I was losing her then.. My friend Winnie describes Snowy as a superwoman. It just seems she is always always able to bounce back. Be it cysts or surgery, ringworm or diarrhea. Yet I notice the fur running thin over her body and her fragile frame when I blow dry her. She has a fat tummy, but everywhere else is quite bony. Reminded me of Shylie, who at her prime was peaking 1300g, when she passed she was reduced to just over 600. So the more she robustly troops through her life, the more I must remind myself not to take that for granted.

I just wanted to say sorry, Snowy, that I sometimes didn't notice you enough and even judged you for your eye color (I know what the hell right...), and I want to say thank you - for pulling through every time, for making me so proud of you and for being so strong... and that through all these years, you've really earned your place in my heart, every bit of it. So it's not just that I want you to stay healthy but I need you to. 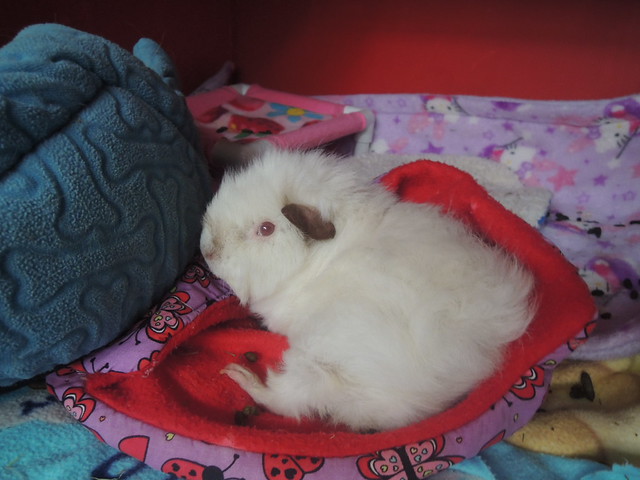 Just so this post doesn't get so depressing.... best photobomb ever! 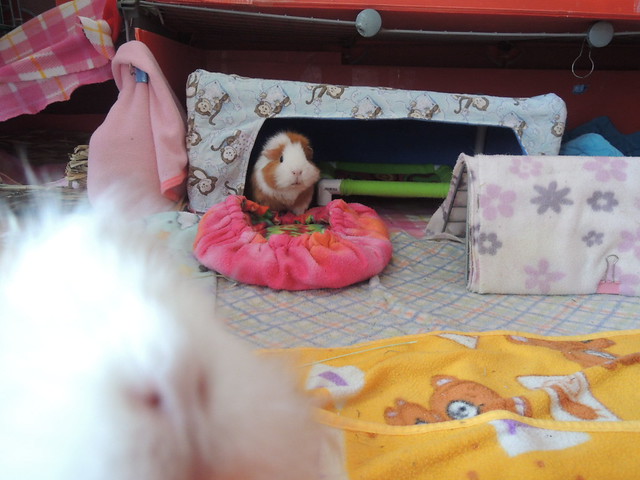