This thought crossed my mind the other day. I was just musing over the fact that (and I'm sure this is only something piggy slaves like us would understand, and share...) when we love our pigs so much we're obsessed with every little detail. From the pink foot pads to the crests at the top of their heads, and piggy tongues are always a favourite, lips too. The va-va-voom texel hair (*cough*, Alden's Snowflake....), the rex chub (my Snoopy...and Karine's entire gang), etc. etc. ETC. Then there's the drinking. Come on, there's got to be more of you out there who can tell who's drinking just by listening to the rhythmn of their tongue pushing on the spout, right?I'll start this off

Meet Snoopy. Just like her feisty teethies you see there, she drinks like a machine gun. I mean, it's literally GUNNA GUNNA GUNNA I hear. I understand that she always wolfs down her lettuce so she gets to eat more pieces of lettuce per unit time than others, and therefore more veggies in total....but really, there's only one spout! No one's rushing you woman!! 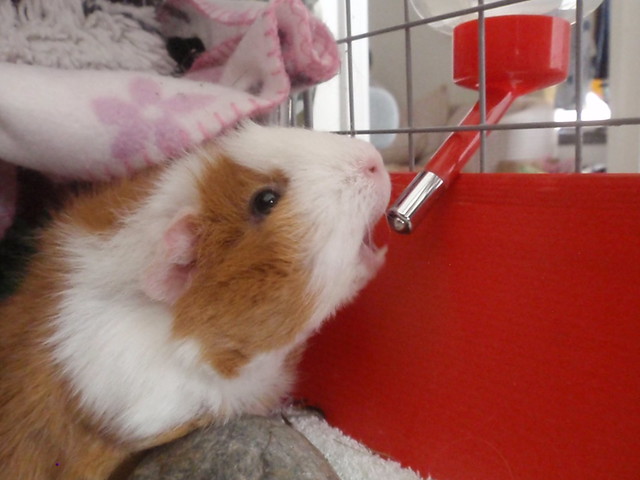 Here's another one of her. You can actually see the water droplets....her chin is usually wet after a drink. Sloppy girl 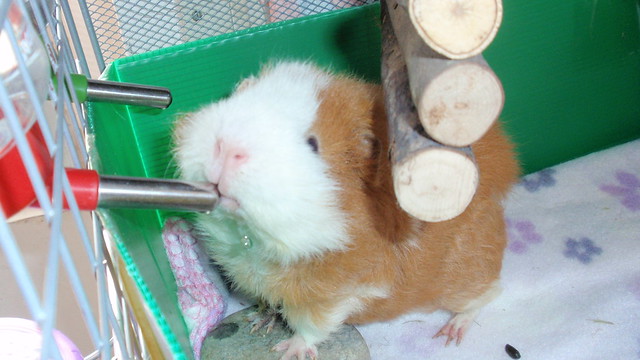 This is Puffy, my first ever piggy and holds a very special spot in me. I've lost him for 3+ years now, so I don't quite remember how he drinks, but I still adore this photo of him, from his four digits perched on the rock, to his lush peruvian hair cascading down, and the beady eyes!! 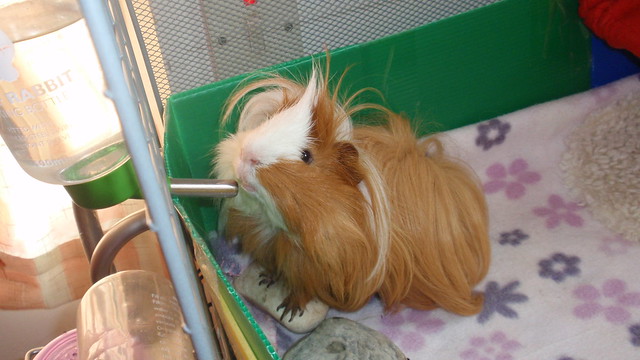 Minipuff! His daughter! She inherited her father's gentle demeanor and is the sweetest....she basically drinks like a stuffed toy. Or a debutante. Delicately, then taking a long time to swallow and even chew on the water (it seems) in between takes. When I'm at the computer and I hear someone drinking really slowly, sometimes with a pause so long in between I thought they finished drinking already...it's always her. 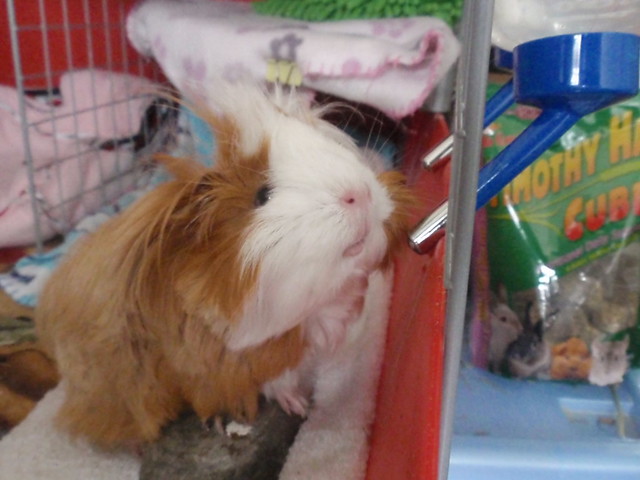 That's Flubby! The baby of our herd. Poor little girl (this was 4 months back) was so small she literally had to paddle her way up the coroplast just to be tall enough for the water ! 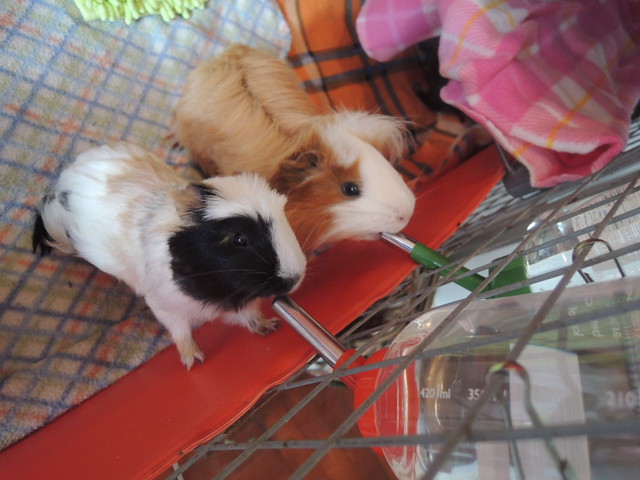 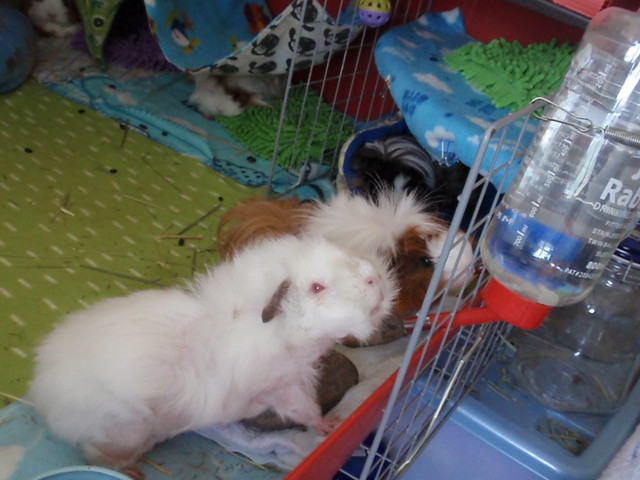 Then there's Cotton! Cotton was a soft, fluffy beautiful boy. (RIP) This was him as a baby, his first time figuring out the water spout! 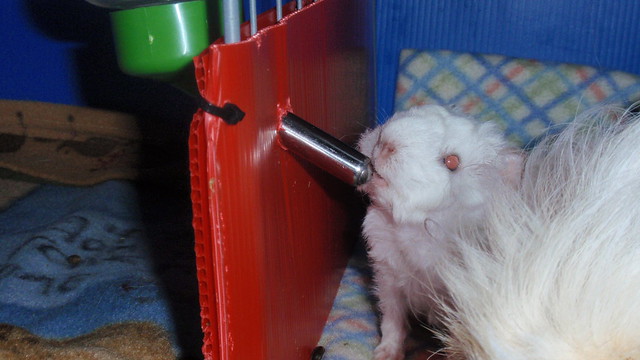 Things got interesting when he got older and lived with his litter brother, Fuzz. The two of them were polar opposites. Cotton was always courteous and often get pushed out of the way when his brother (bigger and more burly) was thirsty. Cotton would then make a lap around the perimeter of the cage and come back with a face that said "are you done? can I drink now?" aw.... 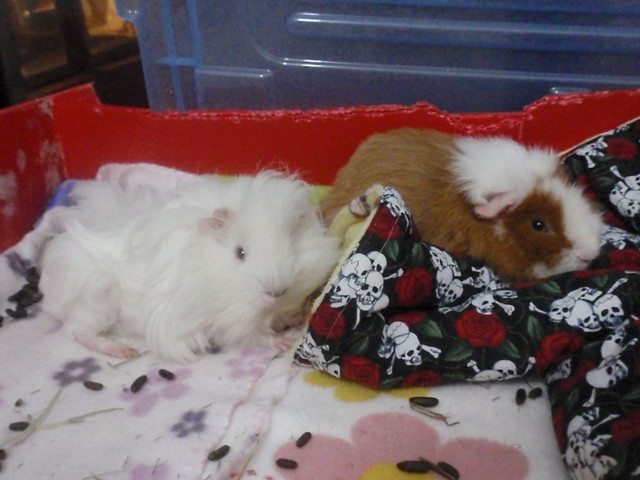 I distinctly remember revising with my brother back then, and we'd hear GUN GUN GUN GUN GUN GUNGUNGUNGUNGUN - in quick successions, that was Fuzz Compared to a really soft, slow GUN........GUN GUN.............. .... ....... gun.. his drinking rhythmn was so random that I actually (out of boredom) started recording his pattern trying to see if there was a logical sequence behind it.... 2,3,1,1.....1.....4! It was more irrational than pi .Buggy! He obviously thinks the water bottle is a chew toy. We have bite marks on the spout. He's also very elusive and most of the photos I have of him are of him drinking - that's usually when he actually comes out of hiding. He's very beautiful. 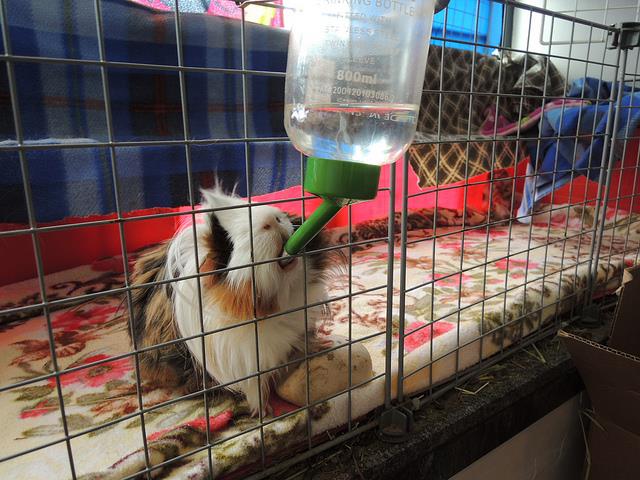 PJ (Buggy's roomate) - RIP. PJ was a real goof when it comes to drinking. For some reason his head had to be perpendicular to the spout! Just as well, because he has the fluffiest chinny for us to marvel at! Who else have pigs who drink with their heads turned like that? 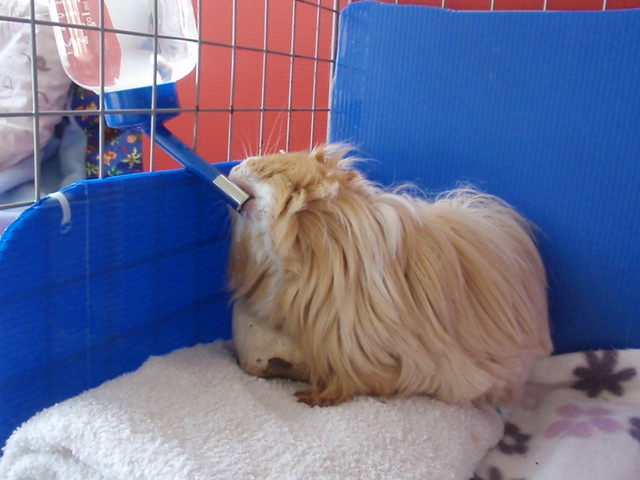 Share with us your piggy drinking anecdotes, I'll add them below

MrTex and I make a game of it. Guess who is drinking. We are both correct about 98% of the time. Once in a while someone fools us by changing it up little.

Peaches has always been a heavy drinker, and really hits that bottle hard (clankety, clankety, clankety). She's a skinny (young in this picture, now 6 3/4) and has a ravenous appetite along with that bottomless thirst. Lots of poop and pee to deal with!

I can definitely tell without looking which of my pigs is at the water bottle. I had a previous pair who would patiently line up behind each other to drink from the same water bottle even though there were 2 water bottles side by side.

I can tell too. Kooky used to hate loud drinkers when she wanted to take a nap, so she taught them to be more quite applying a butt nip, lol! Current drinkers: Plucky is a gobbler of a large amount in one go. Yiyi takes sips. Yuyu makes smacking sounds after a drink, heheheh.

My girls are very quiet drinkers. I don't hear them. I watch them sometimes. They will take a sip of water, turn around and eat a bite or two, and repeat.

Eclair used to have this really weird way of drinking water - she'd try to tip her head upside-down. So very strange. I caught this photo of Bertie, as she was chewing her water: 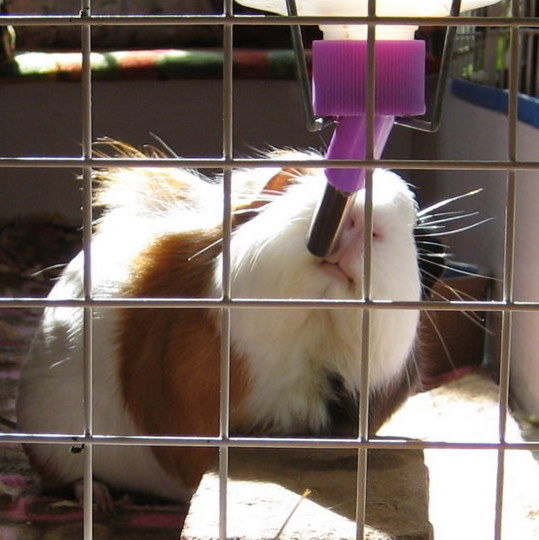 I know Barnaby is drinking not because of the clinking of the ball but because he swishes the water around in his mouth after each drink. Hobbes drinks very fast, really quick taps.

Calvin is SO loud drinking. He likes to push the water bottle up and let it smack down between each drink. You can literally hear him while watching TV downstairs. Grover (RIP) He was the biggest drinker, you knew it was him because of long you could hear someone drinking. Ernie takes long drags of water at a time. He really puts a large portion of the spout in his mouth and stays there and then lets go to swallow.

I love listening to my piggies drink! Fluffy drinks very quickly with water falling off his chubby neck and makes these funny sounds- like lip smacking. Craig, Niko, Kobe and Teddy are slobs to and try to take the water bottle with them. Clank clank bang bang. Sassy and Maggie are dainty drinkers. They take their time. Sometimes bicker over it too, even though they have 2.

Charlie Chocobutt did a dance: drink, pellets, drink, pellets. Ouiser always drank in twos: drink-drink, drink-drink, drink-drink. Albert is the machine-gun drinker. Snickers acts like it's the first time he's seen a water bottle and drinks upside down, sideways, pulling the bottle and banging it back, whatever's noisiest and least tidy. When you posted this on Facebook I realized I don't know how Cookie drinks, so I watched carefully just now, and: she's absolutely silent. If she weren't plump and shiny and healthy I'd wonder if she were even getting water out of the bottle. It's amazing how quiet she is.

Ace is the bottle-slammer. Rudy is like Cookie, apparently. If he didn't produce pretty poos I would worry. I never hear him, but have caught him once. Ace's favorite time to drink is from 3-6 am. It's a lovely alarm clock. (They are in my room)

Neal, who just passed a week ago, always used to crack us up, because he would shove about half of the spout into his mouth and then rattle the ball like crazy. It really amused my dad when he came to visit us.