A few weeks ago, I put Franklin to sleep. He was the third pig I lost in the short space of 6 months and I was just thinking...of the 8 pigs I have left, aside from Minipuff, he's the only other pig that would absolutely wrench my heart out to put him down, because he just fought so hard and whatever weaknesses he had he made them all up and more, with his enthusiasm, and after 15 pigs I've never seen one so ready to take on each day in strides, never hindered by his health, but rather merrily oblivious about it. and once again, I am humbled and grateful to have him grace my life...albeit for only less than a year.

Last year when I met an old friend she mentioned her friend was looking to give away his guinea pig, he's about 15 years old and just not interested in his pet anymore, I offered to help rehome him..and as many pig lovers are all too familiar with...'rehome' is just an acronym for 'stay. for good.'

When I picked him up he came with his cage, which is the size of a 'glorified litter box', in guineapigcages.com's words. He looked ok at first, but when I first held him I noticed a whole array of problems. Starting with his overgrown nails, 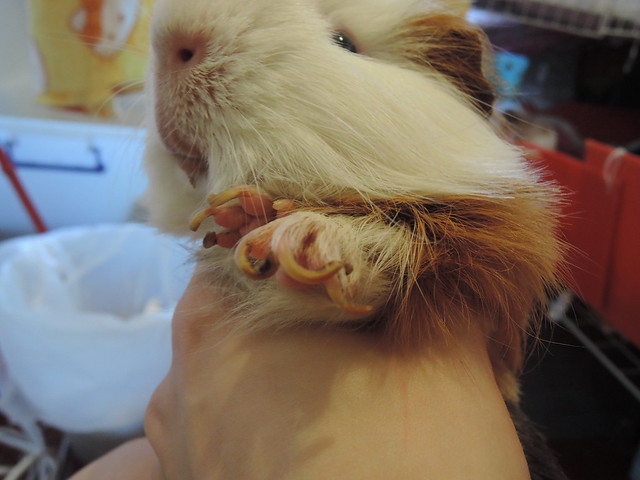 to matted butt hair....but the most horrifying of all was his frame. The few who've actually touched him are also shocked at how skinny he is. Because he's a sheltie his long hair conceals what is actually an abnormally muscle-less torso, to the point where its just hanging off his spine, almost like a cape. When he walks his sides kind of just flap from side to side, because there's no firmness or just any muscle mass, at all. His spine protrudes out and his hip bones are jutted out on left and right. it was really quite scary to hold him, everytime.

I know he was with his previous owner for 2 years, that he was fed pellets and hay but never ever vegetables or vitamin C. I don't know whether this severe deficiency has rendered him this way...or was it some genetic predisposition that was even more out of my control to help fix. But I tried what ever I could to make up for what he was deprived of before..

He got the full new-comer treatment. Bath, 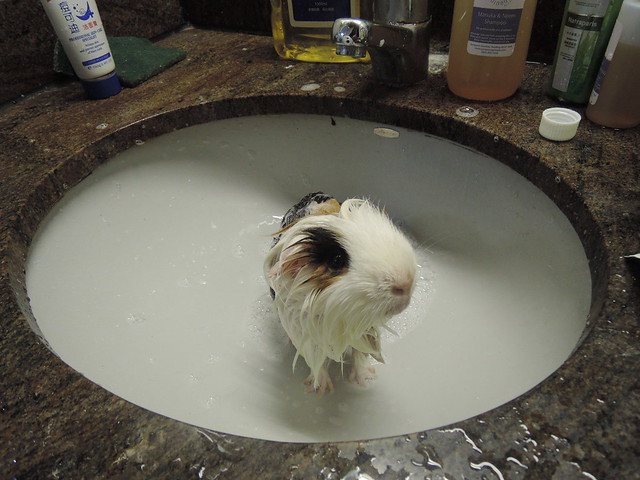 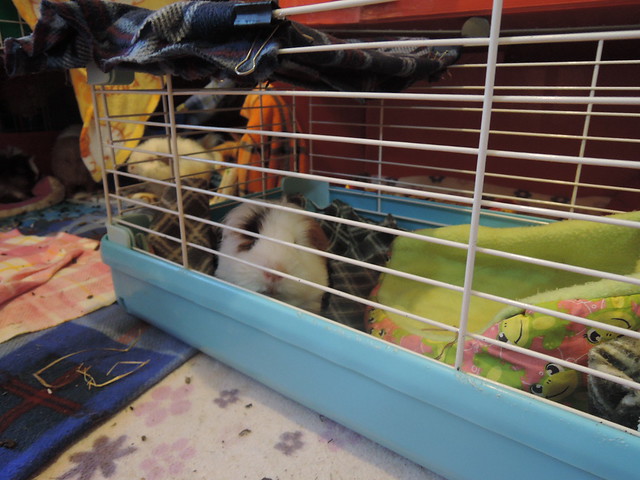 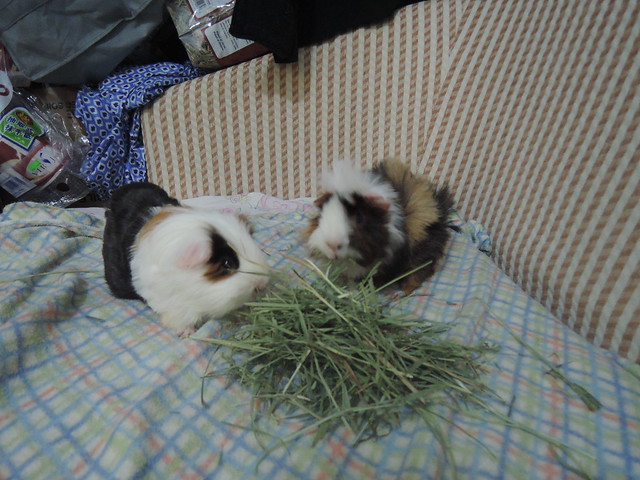 till that moment he's standing in his new home and going 'seriously? this is how good it gets?' 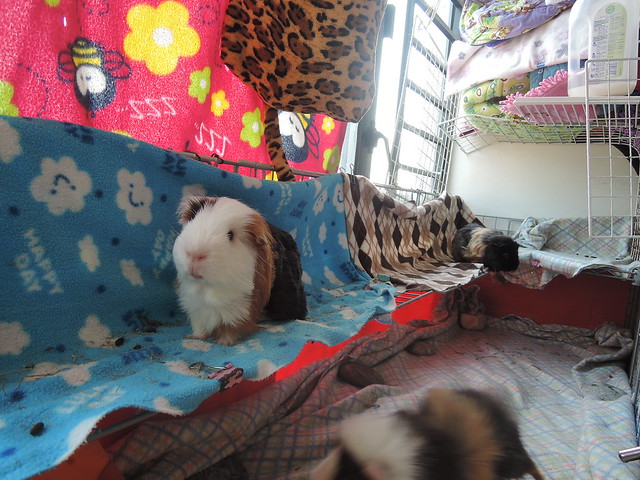 Couple things I noted about Franklin. First off, he is the friendliest pig you'll ever meet. to pigs and humans alike. When he was eating hay with Buggy, Bug made some aggressive chatters and even tried to rile Franklin up a bit, but he just went on eating hay merrily, completely ignoring the advances from the boar beside him, going like 'you wanna piece of me? ehh??' 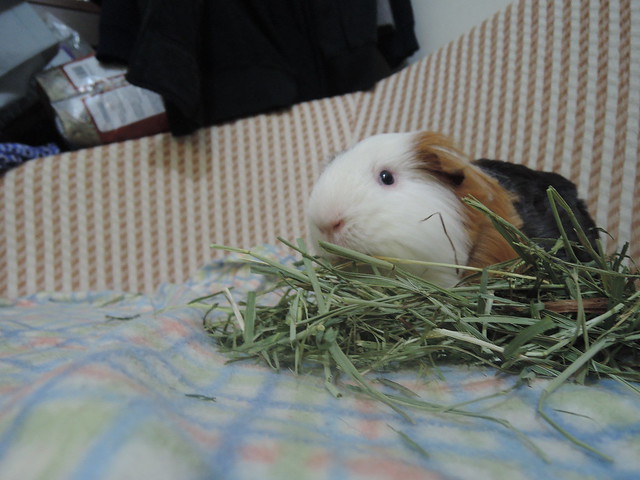 I mean this guy was just so chill. he's like that guy at work you can't even piss off because he's always smiling. Buggy and Rue Bear were really quite taken aback, as far as they were concerned, cage life was something of a survival of the fittest, you had to fight for yourself once in a while to get the best hay, to get the water spout. then there's this new dude who just kind of...sauntered in and made himself right at home. it's not that he needed to fit himself into the hierarchy, he isn't even aware there is one. 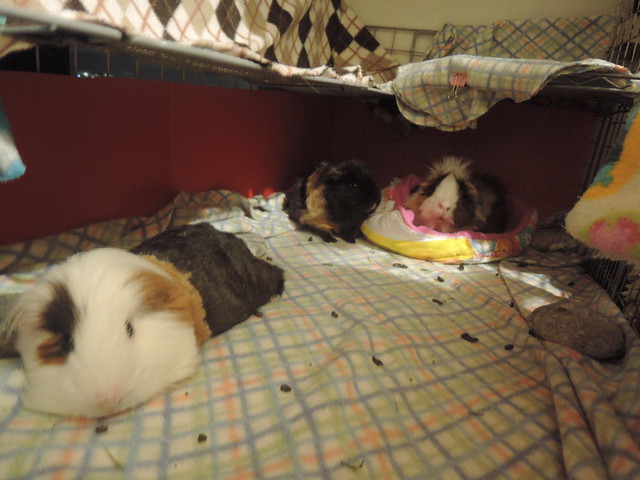 Since it takes 2 to start a fight...Buggy soon lost interest. and Franklin incorporated himself effortlessly into the cage =) at this point my dad was accusing me of um, 'smuggling' more pigs into the room without his permission. or even acknowledgement :P *cough, shifty eyes*

there's this hole in one of my grids and I was picking up the hay pieces on the floor in front of his cage, when I looked up, kaboom 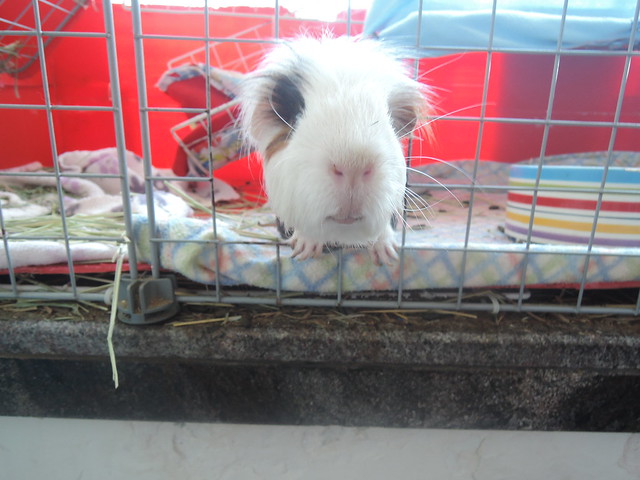 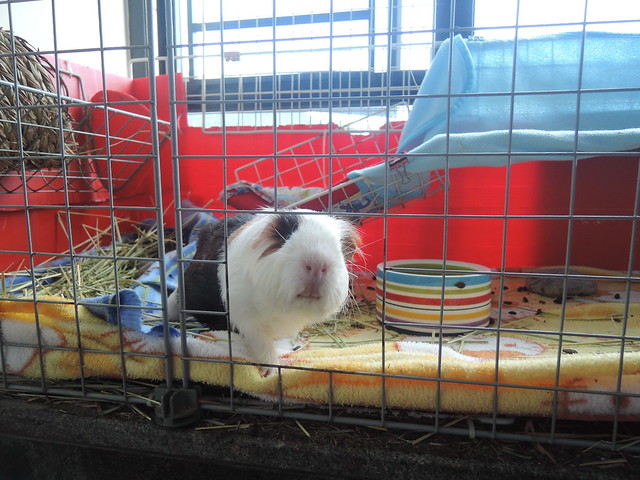 he was more like a puppy...he'd be the first to greet me every morning, every night, he'd dash right to the front as soon as I enter the room, and do paddle up the grids. Like a cheerleader, he also led the other 2 to do the same. Bug and Rue were always shy and elusive, they were the type that waited for food to be placed in their cage, for the food-placer to vacate the premise...then they'd cautiously come out and eat. but Franklin taught them that sometimes you gotta fight a little harder, reach a little higher. 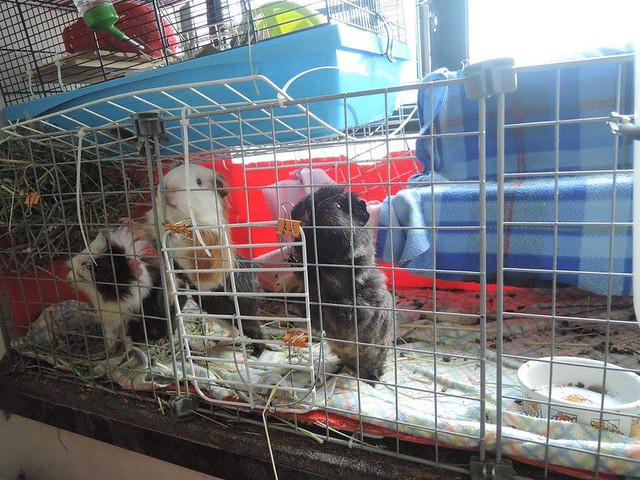 also, he had the biggest paws and lips. you can see the comparison here with the miniature features of a Minipuff. 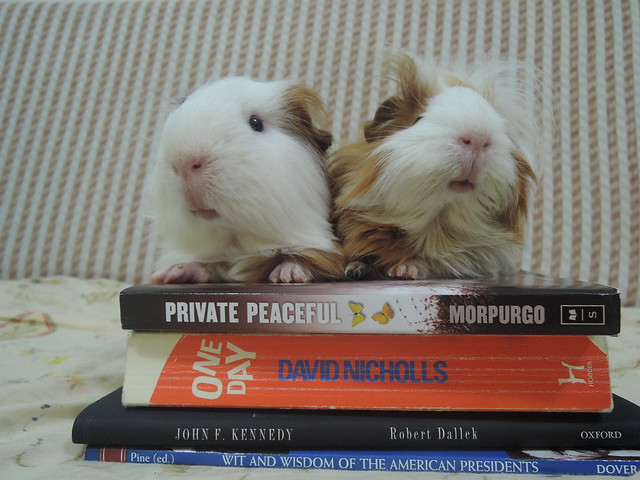 AND, above all, he was a snuggler 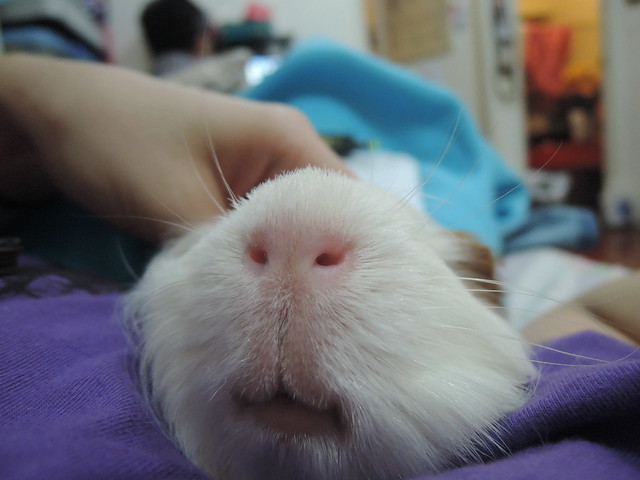 the only down side is, and this makes me smile because it reminds me of Cotton, who was also sweet and soft...but stinky :P He had the biggest appetite, he would wolf down anything, everything, and promptly shit them all out. Whatever he was taking in, was not being taken in, but all gets crapped out. Because of this, he never gained any weight...and well, let's just say I'd be a little dismayed to have him as my roommate because the amount of poop doubled and so did the smell.

what was really endearing about him was he was always trying out new things, and he was always so full of life, and ready to love life :) 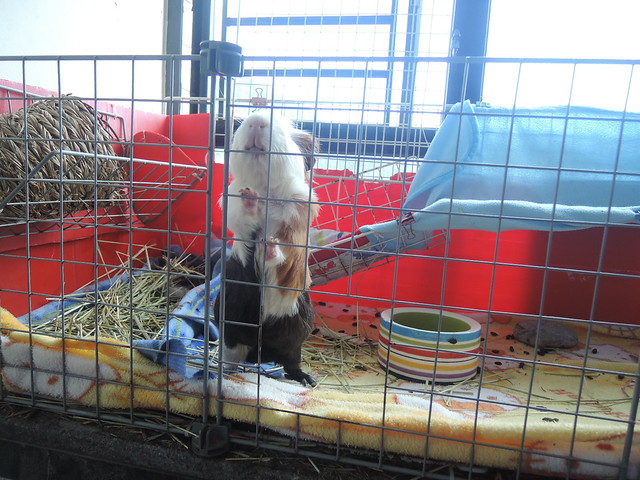 there was the time Rue was taking too long with the water, and Franklin searched for an..alternative route to get to the spout. Taking 'thinking OUT of the box' to whole new levels, people :P 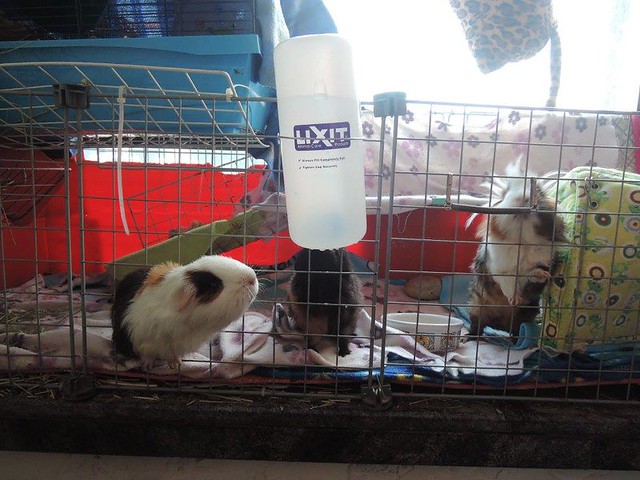 just like Snowy, he had that 'skill' of making his eyes disappear in some of his cutest photos. 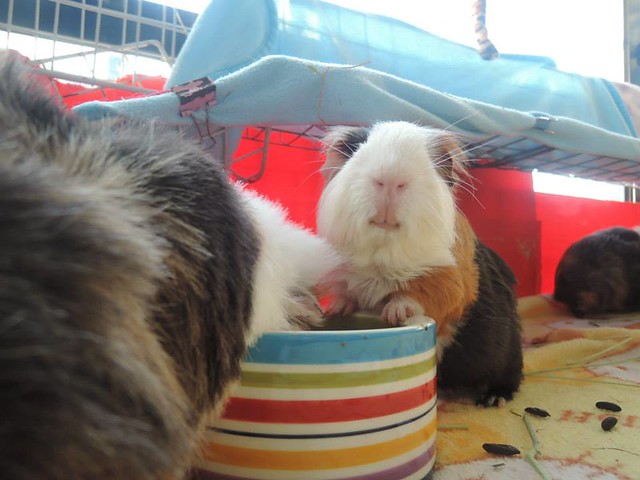 Things went down very quick for him. One day I found him hunched, then I found blood in the cage, then we found stones. one lodged in his urethra, the other in his bladder. 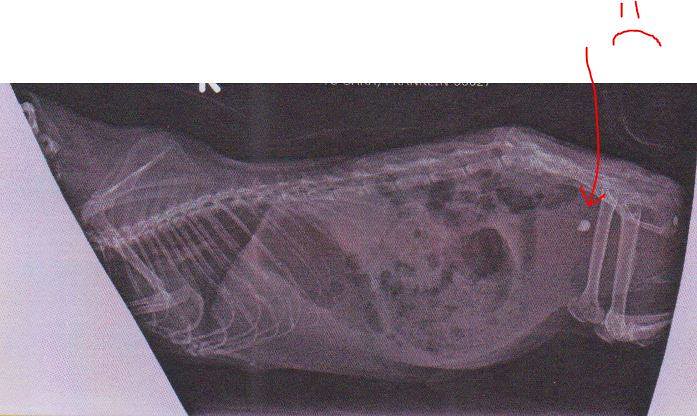 I've never had a stone pig since Puffy 4 years ago, everyone gets the same diet, and gets regular shilintong feedings. So I'm certain this was not a general case, but an isolated one. I knew his weak health and history would take a toll and come back to haunt him some day, (and if this were the case...then he is a sad testament to poor diet and lack of VC. Please, gp owners...spread the word) but I really didn't think it'd be so soon. Somehow with him around since last July, he pumped zeal into the cage and taught me that you don't focus on your weaknesses. you work them to your strength.

by now he'd stopped eating, and didn't even like critical care. he was miserable, he was losing whatever weight he still had on him, I tried to make him comfortable but he was completely disinterested and just wanted to sulk in a corner. I force fed him many times a day, but eventually the cc was just dripping out the sides of his mouth because he was tired, and it's painful when we need to make these decisions but it's right when we do, and I miss him very, very much.

If there was a song I'd dedicate to him, it'd be Candle in the Wind, Elton John. He reminds me that life is short, joy is fleeting, and too often what makes us happy are transient and gone too soon...but we hold onto them, and we commit them to memory. maybe we'll see them again someday.