Where guinea pigs are from:

Guinea pigs are part of the cavia porcellus family, they are native to south America. Astonishingly, their wild ancestors used to be as large as buffaloes! They roam the grasslands, grazing throughout the day. However, they soon became extinct, as being large prey animals, they were easy targets for predators. Now, after hundreds of years, guinea pigs have significantly shrunk

Now they are a ball of fur that fit snuggly into our arms. It's almost as if piggies are designed to be cuddled.

The official name for guinea pigs is called Cavy.

Today, wild guinea pigs can be found in south America. But they have largely become domesticated, particularly in North America and Europe. In South America,  however, guinea pigs are (to our dismay...) a delicacy. They are raised, bred and then eaten *cries*. But thankfully, they are much loved by the rest of us.

The average guinea pig weighs around 2-3 pounds. 1 pound is approximately 500g, so they are between 1000-1500g. Males are usually heavier than females, but this is not always the case.

The average life expectancy is 5-7 years. However, some have lived to a mighty 9 years old. The longest living guinea pig in the world is 14 years old!

Abyssinian:
These have hair growing in random swirls, called "rosettes" throughout the body; they kind of jut out in all directions. They come in many colors, plain and multi. They give a very "chunky" impression and look almost comical. 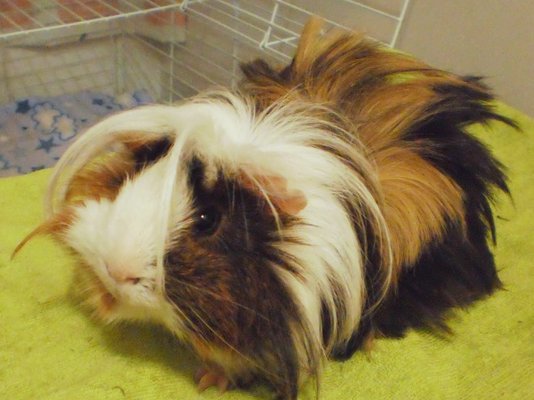 This is my abby Buggy, see how the hair on the his butt is all jutting out in random swirls? He is a Tricolor.

The hair of this breed is short, and lighter at the tip than at the shaft, giving the coat a coarse look. Its highlighting is called "ticking". They come in many colors, including gold, silver, cinnamon, chocolate and cream.

There are two types of crested: the English and American. A crest is a little crater of hair on the top of the head. The America crested has a crest in a different color, whereas the English crested is the same color all over. ;

The coronet has a kind of crest on the top of the head, except that it flows all the way down around its face. This is a long haired breed so the hair will cascade around the body, like the Peruvian.

Peruvian:
These have long sweeping hair that cascade over either side of the body from a line down the middle. The hair grows forward on the head, usually covering the face a little. I call them my little emo-pigs, because they look like emos, sitting in the corner, covering their face with their hair 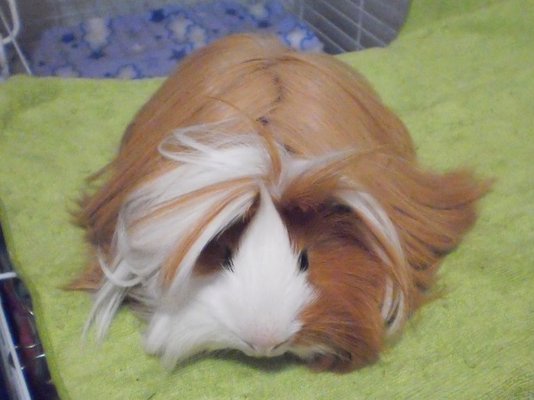 The fur on his body grows from a center hairline. The hair can grow quite long and drape around the body. 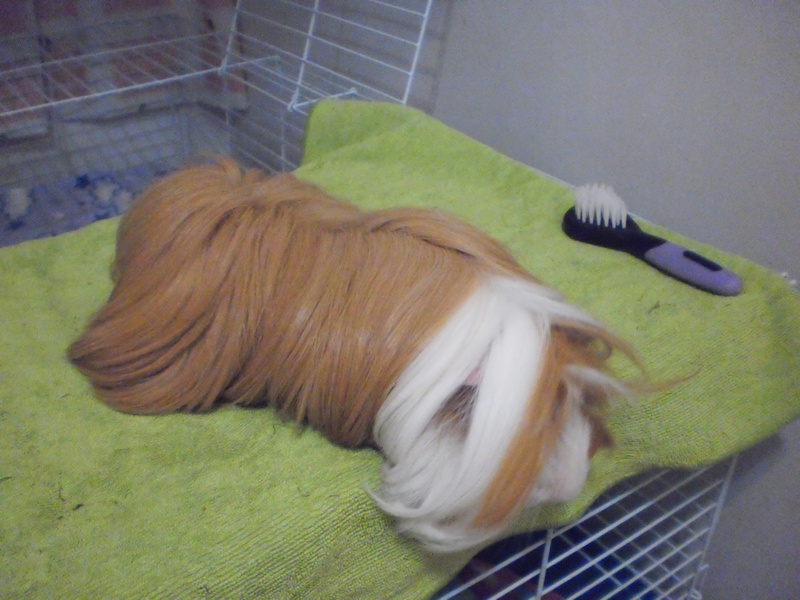 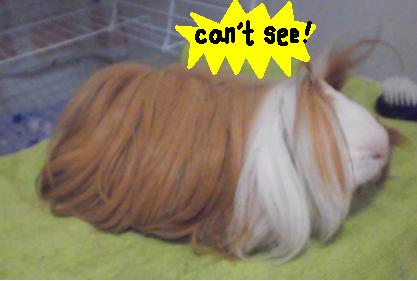 Another name for the Rex is called the Teddy in America. The name is derived from the fact that they look like Teddy bears! The coat is thick, short and springy. Sometimes, their whiskers are also curly! 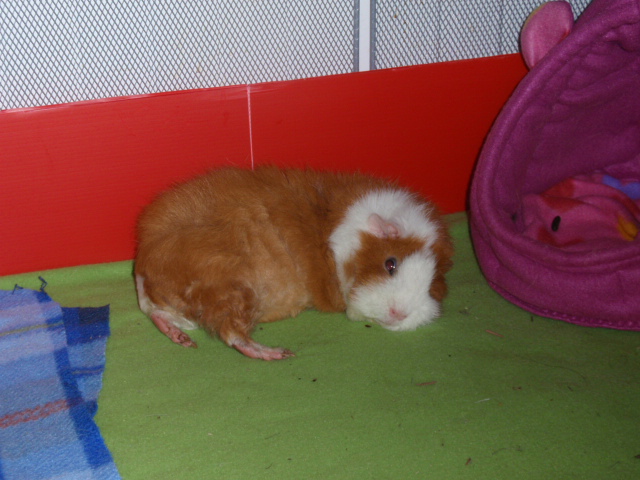 The satin is known for its silky coat that looks almost luminous. This is due to the fact that the hair shafts are hollow, so they reflect light. They look very polished and smooth.

This is the name given to all guinea pigs that are short haired, and have a uniform coat color throughout. The hair is short, and the shape of the ears is usually like a rose petal and flops downwards.

Skinny:
This breed has no fur at all. They are basically covered in skin. They are unique in their own way, and are very rare, so very expensive!! These pigs are more exposed to weather fluctuations so please make sure they are not exposed to cold winds and drafts!

Habitat in the wild:

It is important to know how guinea pigs live in the wild, so that we can mirror their lifestyle as much as possible when they are with us at home.

Although guinea pigs have been domesticated for hundreds of years, they nevertheless come from their wild cousins, so their behavior is built into their genes. Piggies are social animals, they live in herds in the wild, usually with one dominant male and a colony of females. Sexual maturity from other young boars are not tolerated, meaning if another male tried to mate with the females, the alpha male will fight with him to let him know who's the boss. Most of the time, the young male will back down or start his own family elsewhere.

Guinea pigs are generally vulnerable in the wild, since they are so timid and aren't known for their aggressiveness. When in danger, their only defense against nature is flight. For this reason, they are well adapted: guinea pigs can run very fast, dashing and criss-crossing in and out of bushes and tunnels. They have a strong sense of direction, as it is important for them to remember trails and navigate in the grasslands.

Piggies are very vocal, they have a wide range of sounds consisting of wheeks, rumbles, shrieks, purrs, etc. if you have other rodents, you will soon realize that piggies make the most adorable chirps, almost like birdies. While hamsters, rabbits and chinchillas are mostly silent, guinea pigs can be quite the wheeker!

Did you know that one of the guinea pig's closest relative is the chinchilla? They actually both come from south America, while chinchillas live in the high Andes mountains where the weather is a lot colder, piggies live in the low-slung grasslands.

Guinea pigs have contributed significantly to the well being of mankind.

They have been used extensively in scientific research on Tuberculosis and producing the serum against Diphtheria. They were even used by Louis Pasteur in his research on rabies.

Many people label guinea pigs as "dumb and boring".

Many of them keep one guinea pig in a pet store all by itself, so no doubt it will be be dull and sulky all day long. When you provide a spacious cage for your pet, and give them at least 1 or 2 companions, then they really start to thrive. It can be fascinating to observe the daily behavior of these animated little pigs.